Two industrial technology students at the University of Arkansas Community College at Batesville received a $1,000 scholarship from the Gene Haas Foundation.

Joey Hicks graduated from UACCB’s heating, ventilation, and air conditioning program four years ago and earned a universal HVAC license. As the job market became increasingly challenging due to the COVID-19 pandemic, Hicks decided to return to the college to complete an industrial technology degree. “I came back to complete my welding certificate because that was the only thing I didn’t have,” he said. “The program has had a big impact on me. It’s taught me how to be a professional and not just an employee.”

Hicks has accepted a position with Flywheel Energy. According to the company’s website, Flywheel Energy is “a private exploration and production company formed to acquire and operate large, producing onshore U.S. oil and gas assets with an emphasis on the Rockies and Mid-Continent.” Hicks said he will be learning how to maintain gas wells primarily, but will have the opportunity to work in a variety of positions with the company. “They really want their workers to be well-rounded. They want you to learn everything,” he said.

Hicks said he will complete three months of training before being assigned to one of four job types based on the areas he excels in during training.

While Hicks is completing his educational journey, Caleb Hoffman is in the midst of working toward his goals. Hoffman graduated as a homeschool student at the age of 16. By the time he reaches his anticipated December graduation date from UACCB, he’ll hold a STEM degree, an industrial technology degree and a mechatronics certification. “I decided last summer that I wanted to earn an industrial technology degree because I’m really interested in CAD [computer-aided design]. I often work ahead on my assignments because I find it to be so much fun,” he said.

Hoffman is a student worker in the industrial technology program as well. As such he’s had the opportunity to learn maintenance for a variety of machinery and has even learned some basics of welding although he is not in the welding program. “Working as a student worker has almost done as much teaching for me as the classes have done,” Hoffman said.

Hoffman hopes to begin a career with Intimidator, Inc. after graduation and work in the company’s research and development department.

According to the foundation’s website, Gene Haas created the foundation in 1999.  Haas initially formed the foundation to fund the needs of the local community.  Scholarships can be used for tuition, books, student’s personal National Institute of Metalworking Skills (NIMS) account, cost of individual NIMS credentials and small personal tools the students are required by program to purchase. UACCB received a grant from the Haas Foundation in 2019 and another in December 2020.

“UACCB is incredibly grateful to the Gene Haas Foundation for recognizing the value of investing in students through their scholarship-funding program,” said Kim Whitten, director of advancement. “As these two students have demonstrated, UACCB students are receiving top-notch training in the technical skills needed to prepare them for available jobs. The impact of this funding not only provides a means for individual students to purchase tools, equipment, and books to help them learn technical skills; it has a compounding effect on their families and our regional economic development as a whole by providing a highly sought after skilled workforce.” 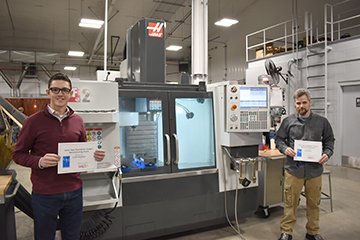