Students in the emergency medical services programs at the University of Arkansas Community College at Batesville will begin training with augmented reality using the PerSim Holographic System. UACCB is the first in the state to acquire the PerSim system.

Powered by the Microsoft HoloLens, PerSim provides high-fidelity realistic holograms that can demonstrate a wide array of medical conditions for both adults and infants including seizures, stroke, chest pain or heart attack, and respiratory distress or failure. Students view the holograms through a headset and control the scenario with specific hand gestures. The view of the student using the headset can be projected onto a Smartboard so the rest of the class can see what the user sees and participate in the scenario as well.

“We wanted to expand our programs and utilize technology that our students are already familiar with. Students in high school are using 3-D technology and virtual reality. This is a way to reach them where they are,” she said.

Davidek added that the portable system offers benefits that traditional simulation mannequins do not. “It’s time consuming to do moulage on traditional mannequins to create scenarios. They’re heavy, they’re attached to cords, and they’re not as durable,” she said. “With this system, we can project a hologram in the back of the campus ambulance and have it react the way we want it to faster and easier.”

The system can also change the scenario in real-time just as a patient’s condition would change. “If the student administers the wrong treatment, the holographic patient will decline in real-time. The student can then take corrective measures and will see the patient’s condition improve,” Davidek said. The holograms can also be overlaid over traditional mannequins so students can practice hard skills such as starting an IV or intubating a patient.

She added that the system can be particularly useful in light of the college’s move to all online classes as a precautionary response to COVID-19. “We are able to record scenarios and take photos with the system that we can then post online, so students are able to see the instructor’s interaction with the hologram.” Davidek said while the system will be utilized primarily by EMS students, UACCB nursing program will also be able to benefit from using the system. 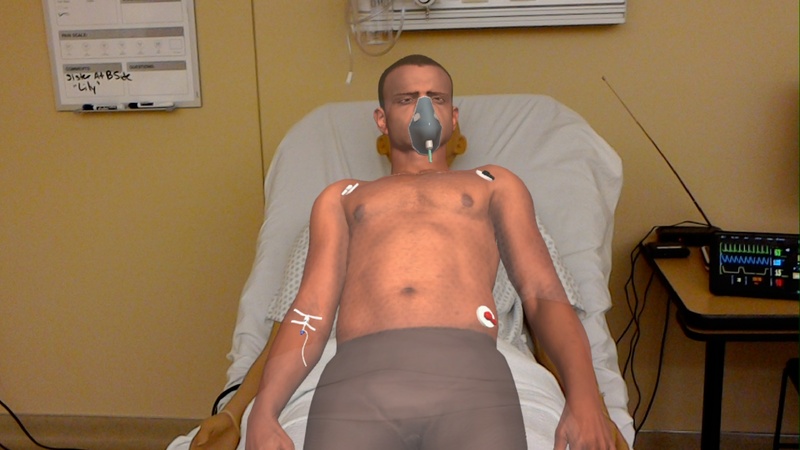