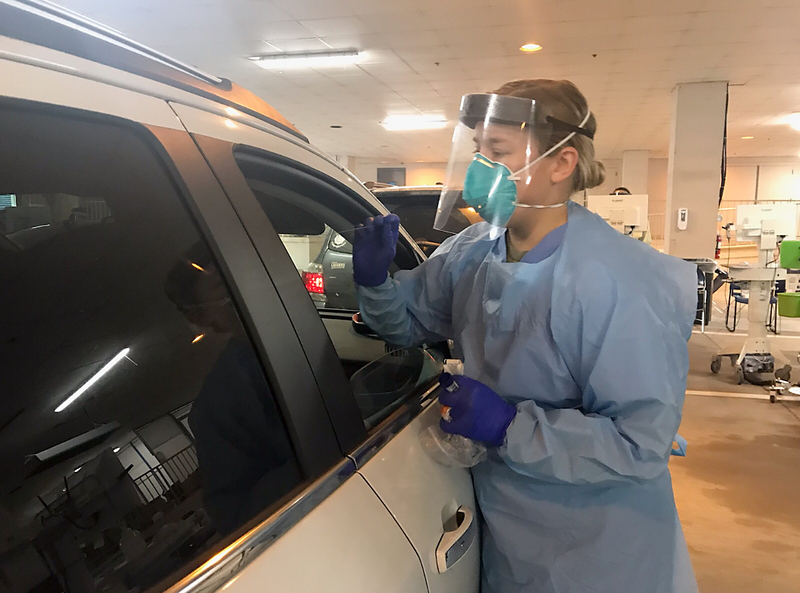 As a private first class in the Army National Guard, Sydney Carr was prepared to serve her community and country in the event of a disaster. But nothing could prepare her for the emotional aspect of being on the frontlines during the COVID-19 pandemic.

“This is so much more emotional than I thought it would be. Some things I will never be able to shake. I won’t ever forget this. Some patients are so scared. We’ve held their hands and cried with them. We’re trying to help them cope through this. I knew I would be helping people through disasters, but I never thought it would be like this,” Carr said. “I had one patient break down crying telling me how she lost all five of her brothers in New York to COVID-19.”

Carr is a student in the generic registered nursing track at the University of Arkansas Community College at Batesville. She was activated to help conduct testing at a drive-through screening clinic for the novel coronavirus (COVID-19) at the University of Arkansas for Medical Sciences. Carr conducts the nasal swab to collect the sample needed to conduct the test for COVID-19. Carr said patients come through the clinic and speak with a doctor to determine if they need a test. If the patient needs a test, a medic like Carr swabs the patient to collect a sample for the test.

“Some patients that come in, we can tell they definitely have it. Some people are just being cautious, and that’s good. This virus affects everyone differently. It’s not the same for everyone. It’s been interesting to see the different manifestations of the illness from patient to patient,” she said.

Originally from Chicago, Ill., Carr attended Harding University before she came to UACCB. “When I decided to leave for the military, the timeline just didn’t add up to attend nursing school at Harding. My fiancé is from the Batesville area, and his mom told me to look into UACCB. I applied, and it felt like I got accepted right away,” she said. Carr anticipates graduating in December with her RN degree.

Carr said her father was her biggest inspiration in her career choices, both as a nurse and her military career. Her father is a nurse and was also an officer in the U.S. Marine Corps. “I was in ROTC while I was at Harding, and I met a couple of people who were in the Army National Guard that really influenced my life. The more time I spent with them, the more I felt it was a good move to join the Army.”

Carr completed basic training in 2018, followed shortly by medic school. “I was gone close to 10 months. It’s not easy, but it’s worth it,” she said.

Carr and her fellow Guard members working at UAMS are quarantined together and transport together to and from the screening clinic. She said that while the team has personal protective equipment and follow very strict procedures for donning and removing their gear, the risk they face daily is all too real. “Even with all of the precautions, we are still at a pretty big risk. We could become exposed, and it wouldn’t be anyone’s fault. We have patients sneeze on us. We have patients vomit on us. It’s not the same as what you see on the media. I’ve never lived through a pandemic like this, much less worked through it. It’s an eye-opening experience. You hear a hundred different things on the media, but until you see it in front of your face, you don’t know anything,” she said.

Added to the stress of fulfilling her military duties is the stress of trying to complete her RN degree. Carr said she falls back on the values instilled in her through her military training to help her cope with so many things at once. “It’s taking a lot of dedication. I come home every day and hit my books. On my days off, I still get up at 6 a.m. and study until dinner time. I think of the things I learned in my training — honesty, integrity, courage. I think if I let this down, then I’m letting myself down, and I’m letting my team down. It’s good to have a background of constant commitment to keep me on the right path.”

Her activation has already been extended twice, but Carr said she’s really hoping she’ll be home in time for her own wedding. “I’d really like to not miss my wedding,” she said laughing. Carr and her fiancé, Chandler McCoy, are planning to get married July 4.

As to the future of her career, Carr said she knows she wants to remain in the military, but she’s taking everything else one day at a time. “I haven’t been able to think very far ahead, and I think COVID has changed everything I was thinking anyway, so I’ve just been taking it a day at a time. I think that’s the most therapeutic thing I can do right now and that’s what I would say to everyone. Just take it day by day and that we’re all here for each other.”