With two degrees already under her belt, Tina Russo stepped out of her comfort zone and took up welding. In the spring of 2020, Russo joined the Industrial Technology program at the University of Arkansas Community College at Batesville to work toward getting her welding certificate. She was recently awarded the 2020 Regional Industrial Safety Alliance (RISA) Scholarship.

“UACCB was a happy find,” Russo said. “I was moving from Pennsylvania to Arkansas and didn’t know much about Batesville or any schooling around here.”

Russo holds an associate’s degree in communication studies from Bucks County Community College and a bachelor’s degree in theater with a concentration in design and production from Temple University in Philadelphia. She worked in Colorado, Texas and New York before moving to Batesville. She said she has a contract on standby in Pennsylvania when theaters are up and running again after closing due to the COVID-19 pandemic.

“Theater is taking its cues from Broadway and isn’t open right now,” she said.

Russo said she had hoped there would be a way to go to school for welding, and she was happy to know that UACCB had a “well-known welding program.”

“I have amazing teachers who are very patient with me,” she said.

Her goal after completing the program is to maintain her job in the theater industry and possibly travel with a national tour.

Russo was born in the state of New York but grew up outside of Philadelphia. She said she graduated from two high schools: Central Bucks West High School and Middle Bucks Institute of Technology.

“CB West was all my academics and MBIT was a vocational technical school where I chose to focus on engineering and related technology,” she said. “I thought I was going to be a mechanical engineer. That didn’t work out.”

She said she discovered her passion was really in theater, and now she is connecting theater with her welding career path.

“I was initially scared and awed by it,” Russo said about welding.

Welding was a foreign concept that was not part of her career path until Russo was working in a theater scenic carpentry job for a production of West Side Story, and her coworkers told her that they wished she could weld. When she learned that the show needed a metal fire escape, she was asked to help by cutting square metal tubing, arranging it and grinding down welds. She said she decided that she wanted to learn how to weld as she watched the metal build take shape.

Her fear of welding transformed into a passion, and she decided to find a school and learn more. She found the program at UACCB and applied for the RISA scholarship.

To be eligible for the $500 RISA scholarship, Russo submitted an application form and a 500-word essay about why she was choosing an industrial technology related career. Grade point average, courses and completion rate were also considerations.

In her scholarship application essay, Russo wrote, “When I first heard about welding as an industrial technology related career, my assumptions of application turned to factories, cars and pipelines. Now when I hear about this career, I know it’s about opening more opportunities in the job market than what I initially could have imagined.”

RISA is a local alliance of industrial technology professionals from different trades that promotes health and safety for workers by sharing resources and information to enhance safety programs at regional industries.

On August 19, 1999, safety professionals from various companies in Jackson, Independence and Sharp counties met with a goal of promoting health and safety in their businesses. Since its beginning, RISA continues to bring industries together to help keep their employees safe from injury and illness. 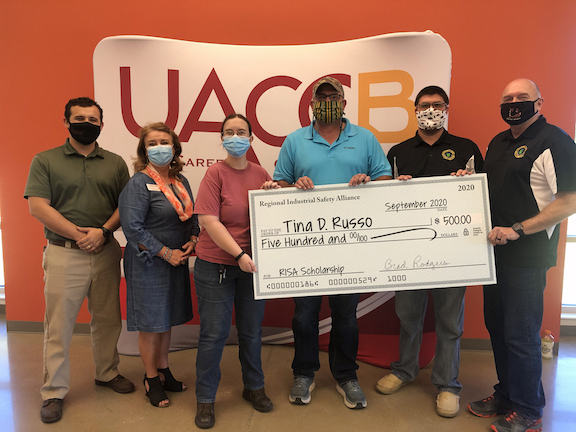